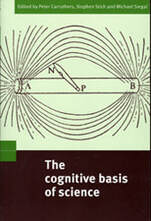 The Cognitive Basis of Science concerns the question “What makes science possible?” Specifically, what features of the human mind and of human culture and cognitive development permit and facilitate the conduct of science? The essays in this volume address these questions, which are inherently interdisciplinary, requiring co-operation between philosophers, psychologists and others in the social and cognitive sciences. They concern the cognitive, social, and motivational underpinnings of scientific reasoning in children and lay persons as well as in professional scientists. The editors’ introduction lays out the background to the debates, and the volume includes a consolidated bibliography that will be a valuable reference resource for all those interested in this area. The volume will be of great importance to all researchers and students interested in the philosophy or psychology of scientific reasoning, as well as those, more generally, who are interested in the nature of the human mind. (from the back cover).
Table of Contents