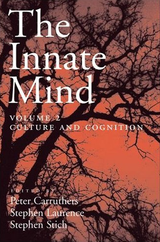 This is the second volume of a projected three-volume set on the subject of innateness, based on the AHRC Innateness and the Structure of the Mind Project. The extent to which the mind is innate is one of the central questions in the human sciences, with important implications for many surrounding debates. By bringing together the top nativist scholars in philosophy, psychology, and allied disciplines these volumes provide a comprehensive assessment of nativist thought and a definitive reference point for future nativist inquiry.

The Innate Mind: Culture and Cognition concerns the interaction of culture and the innate mind, addressing such questions as: To what extent are mature cognitive capacities a reflection of particular cultures and to what extent are they a product of innate elements? How do innate elements interact with culture to achieve mature cognitive capacities? How do minds generate and shape cultures? How are cultures processed by minds? The editors have provided an introduction giving some of the background to the debates about innateness and introducing each of the subsequent essays, as well as a consolidated bibliography that will be a valuable reference resource for all those interested in this area. The volume will be of great importance to anyone interested in the interplay between culture and the innate mind.
Table of Contents