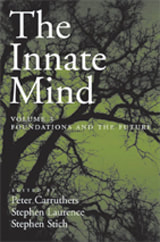 This is the third and final volume in a set of volumes on the subject of innateness, based on the AHRC Innateness and the Structure of the Mind Project. The extent to which the mind is innate is one of the central questions in the human sciences, with important implications for many surrounding debates. By bringing together the top nativist scholars in philosophy, psychology, and allied disciplines these volumes provide a comprehensive assessment of nativist thought and a definitive reference point for future nativist inquiry.

The Innate Mind: Foundations and the Future addresses such questions as: What is innateness? Is it a confused notion? What is at stake in debates between nativists and empiricists? What is the relationship between genes and innateness? How do innate structures and learned information interact to produce adult forms of cognition, e.g. about number, and how does such learning take place? What innate abilities underlie the creative aspect of language use, and of creative cognition generally? What are the innate foundations of human motivation, and of human moral cognition? The editors have provided an introduction giving some of the background to the debates about innateness and introducing each of the subsequent essays, as well as a consolidated bibliography that will be a valuable reference resource for all those interested in this area. The volume will be of great importance to anyone interested in the interplay between culture and the innate mind.
Table of Contents